In this page, the Authors K. Tateno, F. Tombari, I. Laina and N. Navab present the following paper in which CNNs are used to predict depth maps in a monocular SLAM pipeline.

“Given the recent advances in depth prediction from Convolutional Neural Networks (CNNs), this paper investigates how predicted depth maps from a deep neural network can be deployed for accurate and dense monocular reconstruction. We propose a method where CNN-predicted dense depth maps are naturally fused together with depth measurements obtained from direct monocular SLAM. Our fusion scheme privileges depth prediction in image locations where monocular SLAM approaches tend to fail, e.g. along low-textured regions, and vice-versa. We demonstrate the use of depth prediction for estimating the absolute scale of the reconstruction, hence overcoming one of the major limitations of monocular SLAM. Finally, we propose a framework to efficiently fuse semantic labels, obtained from a single frame, with dense SLAM, yielding semantically coherent scene reconstruction from a single view. Evaluation results on two benchmark datasets show the robustness and accuracy of our approach.” 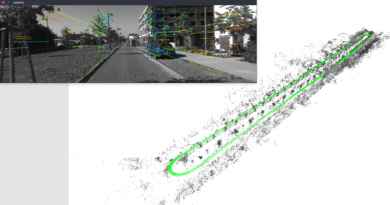